We are living a present time which obliges us to be conscientious, to go from theory to action, from slogans to life principles. To build or, simply, to live ecologically is no more an abstract concept, lost somewhere between politics and full of dust doctoral thesis but a necessity perceived by everybody, as an effect of an every day more artificial and unhealthy life, that consumes a lot and produces very few.

Rehabilitation of existing constructions naturally follows an ecological attitude towards the urban environment. Between the existing buildings, industrial constructions occupy an important place, because of their dimensions and the big percentage of abandoned buildings which have to find a new function in order to live.

The problem we are facing today is the integration of a valuable past (as a form and experience) in our present life. It seems that it is impossible to realise this integration, especially in a poor society as ours, without the development of the services and trade sector, which has to assure the material base of subsistence for the rehabilitated building. But this shouldn't happen without the preservation of some references of the traditional activity that took place in that space and has a value in itself.

2. Some Specific Aspects of Industrial Buildings

Industrial buildings are special between the constructed patrimony by some characteristics which I shall mention below:

3. Some Case Studies of Rehabilitations on Industrial Buildings

The cases presented below are special for having achieved the goal to transform a huge industrial ruin into a full of life building of the third millennium or at least for having tried it. The examples are generally breweries, chosen for their relevant architecture and their popularity in the collective conscience.

The ensemble of the Rahova (historically called Bragadiru) brewery is located in the Rahova district from Bucharest, in an area situated close to the centre, containing also monuments of great architectural value, as: The Bragadiru Palace (by Sonnetzer 1894), The Post Office Custom House and The Military Academy (by the Italian architect Giulio Magni, in the end of the XIX-th century). The promoter of this factory and of the Bragadiru Palace built nearby was Mr. Marinescu-Bragadiru, an alcoholic drinks merchant. The majority of the buildings of the ensemble were built in the end of the 19th century by the German architect A.Schuckerl and the Austrian architect Fr. Waffler. The structure is mainly in concrete and the exterior walls in brick.

The present owner of the factory, SC Bere Rahova SA, has started the transformation of the ensemble into a mall, containing commercial functions, services, hotel, business centre, parking etc. The design team proposed the unification of all the existing buildings by using a covered passage, in order to ensure the fluent access from one building to another, but also as a concept of economy of energy, creating an intermediary space between the outside and the inside.

The late El Aguila factory from Madrid was already transformed in Centre of Arts and Culture of the Community of Madrid, whose first building, the Leguina Library, was opened in 2003. The project was chosen as a result of a national architecture competition, held in 1994, which was won by Emilio Tuñon Alvarez and Luis Moreno Mansilla. The ensemble is located in the Arganzuela district in the south of Madrid, in an area which got an almost exclusively industrial aspect in the end of the XIXth century. The whole area is in view of rehabilitation, within a process guided by the local authorities, pursuing to transform the abandoned industrial spaces into recreation and cultural spaces.

The construction of the factory started in 1912-1914 under the guidance of the architect Eugenio Gimenez Corera, and was promoted by the cultivated manufacturer Augusto Comas y Blanco, some kind of retort of the Romanian Marinescu-Bragadiru. The structure of the ancient parts of the factory is in iron pillars and ceramic vaults on metallic beams (traditional Spanish system called bóvedas tabicadas). The location is very near to two important railway stations - Delicias and Atocha, and the present Centre of Arts and Culture is supposed to prolong the cultural axis which starts with the Thyssen Museum and is continued on the Passeo del Prado.

A special part of the proposal is the preoccupation for an ecological rehabilitation, for avoiding the destruction of the environment and for reducing the energy costs. For instance, the re-use of the demolished material, introducing it in the new concrete, after mixing it with special machines was proposed. The bricks were re-used for installation masks etc. All the existing metal structure was re-composed on the building site by the architect which became a "bricoleur" on the site.

Another remarkable fact is the keeping of the existing equipment of the brewery and its integration in the new mediathèque.

Timișoreana is located in the Fabric district from Timișoara, on a site which dates from the XVIII-th century (the first location, which was different, dates up to 1722). There are documents from 1868 attesting the name Timișoreana. So, it is an industrial ensemble with a special history but also with a remarkable architectural value. The structure of the main building is from brick, some having remarkable vault systems. A consolidation will be needed for each building. Some parts of the factory were restored in the '90s in a discreet way. The enterprise functioned continuously and is in function now, producing the Timișoreana beer.

Location: In the western extremity of the island of Giudecca

Description: The complex of the Mulino Stucky gradually obtained a special architectural and cultural value becoming one of the most important interventions in town. The present mill is the result of a long process of interventions, conversions, amplifications and reconstructions due to the spreading of milling in the area of the late monastery of San Biagio, as a result of the initiative Giovanni Stucky had in 1883. Giovanni Stucky was a modern enterpriser and a courageous administrator of a capital that he knew to obtain and multiply from a modest activity in terra ferma. The development of trade and transports that in the end of the XIX-th century seemed to bring to Venice a new role in the relations with the Balkans and the area of the Middle Orient soon proved the insufficiency of the small enterprise. The industrial complex was enlarged so as to be able to sustain the new quantities that where foresaw on the wheat market. The necessity of sheltering big equipment and huge quantities of cereals transformed the factory in a copy of the model of the great German mills. It is nothing to wonder in the fact that Stucky was advised to choose an architect from Hanovra, Ernest Wulekopf. The style of the building is the ecclectism which was specific to the period, with lots of Gothic, Renaissance and Neo-baroque citing but not lacking originality (the image of a castle-factory, with rich decoration was proposed). Giancarlo Stucky, the son of Giovanni Stucky, realised interventions of conversion and an adjacent deposit which he designed himself together with the engineer Samassa (1922-1927). In 1954, because of competition, the Stucky enterprise was transformed in a corporation.

Present state: The area of the mill has become an acquisition of the Real Estate Society Beni Stabili than was sold to Finanziaria Romana Acqua Marcia, which is rehabilitating it as a hotel complex. Unfortunately the whole ensemble burned in 2003 but now the works are continuing for its conversion.

Location: On the place of the old garbage pit from Santa Marta, on the western side of the Giudecca Channel

Description: Founded in 1883, as a result of the setting up of a Society with half Venetian-half Lombardian capital, the Cotonificio was one of the most important textile factories from Venice and the whole region of Veneto. The initial idea of the society was to buy a large piece of land and sell it in parts afterwards. The initial project, made by the engineers Antonio Baffo and Vittorio Mazzuchelli from Milan, foresaw the realisation of 4 buildings in which 3000 people were supposed to work. Finally Vittorio Mazzuchelli designed a large building with a rectangular plan divided in two parts: the south one destined to the cleaning and combing of the cotton and the northern one for the weaving and stretching. Behind there were the deposits and the administration. The stairs were included in two towers attached to the main building. The image of the building was imposing, with big windows with frames in brick and pietra d'Istria. In the ulterior interventions the northern part of the construction was re-built because it had been bombed in 1916 and the part with storages and offices was replaced.

Present state: The factory functioned until 1960 and now it is rehabilitated as headquarters of the Chemistry Faculty of the Venetian University and of the Institute of Architecture (IUAV).

3.6. Some Industrial Conversions in Copenhagen, Denmark

I will shortly present some images of the conversion of a factory from Copenhagen in a children's library of a residential area. The intervention is remarkable for the results: a lightened, opened, full of life space realised with an extremely small budget. The consolidation system is at its minimum but very efficient - a standing wooden scaffolding leaned on the façade.

The School of Architecture from Copenhagen is sheltered also in a converted building, a military headquarters. 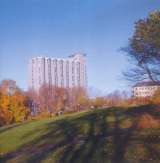 To demolish the old concrete cereal storage, from the '50s, the first building in Norway built using the gliding concrete support would have been regrettable. Though it had lost its industrial function, it remained, by its force and innovation, an incontestable monument of the industrial Norwegian patrimony.

The authorities were conscient on this when they launced a competition for its rehabilitation and the winner, the HRTB agency, proposed its transformation in a hotel...In the '90s the Norwegian state decided to make a national park out of the XVIIth and XVIIIth century industrial area near the river Aker and to transform several typical industrial buildings in schools of architecture, art and headquarters of the national radio and television.

The river board, a succession of workers' houses from the XVIIIth century, was preferred by young people, so the city decided to encourage family settling in the area and turn the cereal storage into a students' dorm.

The operation wasn't really difficult. 500 concrete slabs had to be introduced in the 21 cylinders with 50 meters of height and cut 1000 gaps for the windows.

All the rooms are circular, the accesses and kitchens are solved on circle sectors and the bathrooms in the "lost" spaces between the cylinders. Each group of stores is animated by a different color on the floors and façade, combined by the artist Lykke Fryderlund. The dwellings are of 3 types: simple, double and studio. An integrated furniture, designed by the interior architect Ingrid Lovstad was adapted to the round walls.

As resulted also from the examples above, the general tendency is to transform industrial spaces in places of culture, of knowledge and change of ideas. It is natural considering the tendency of our present and future society to become a society of information and knowledge and, we hope, also a society of communication.