At the initiative of Professor Maria Rosa Cervera Sardá, one of the pioneers of Bionic architecture in the world (awarded with the Bene Merenti medal of IMUAU, 2014), an International Seminary of Bionic Architecture took place in the Faculty of Architecture of the University of Alcalá de Henares. The event brought together specialists from Spain, Romania and Portugal and the students (coming from different countries of the world) of the Master in Advanced Design for Architecture and the City, whose Director Professor Cervera is as well. The fundamental role of the research of the laws and principles of nature was put into light, with a direct contribution to the definition of a sustainable, self-regenerating architecture. The participants were surprised to observe that their parallel researches lead to common conclusions.

The IMUAU was represented in the event by. Elena-Codina Dușoiu, Associate Professor, Tana Nicoleta Lascu, Senior Lecturer and Ana Mohonea, Assistant Professor. The presentation entitled "Shape and Morphology Studies of Natural Forms. Aplications in Bionic Architecture" was based on a presentation of reference concepts (definitions, terms, examples) extracted from the results of the doctoral thesis of Assist.Arch. Ana Mohonea (coordinated by Professor Cristina Victoria Ochinciuc, presented at the Ion Mincu University in December 2016) and on a research determined by the extrapolation of the 4 weeks exercise entitled "Structures and Composition Laws. The Inspiration of Nature”, proposed to the 2nd year students within the discipline Shape Study. The seminary was conceived with a practical component also, the architects studying in the Master being proposed several short workshops. The first workshop required the study and interpretation as architectural structure of one of the following forms: honeycomb (hexagonal spatial network), pinecone (dynamic structure with adaptability to the environment), sunflower (heliotrope structure), fish bone (hierarchy structure) and the leaf (membrane-structure). The results of the short exercise were remarkable, the architects studying in the Master in Advanced Design for Architecture and the City proving a high level of implication and ingeniousness.

The presentation of Senior Lecturer Tana Lascu brought an opportune holistic approach of the concept of nature and a philosophical frame for the definition of landscape and belonging to landscape, especially from the perspective of some Romanian philosophers of the XXth century, universally recognized (Mircea Eliade, Constantin Noica etc.).

Professor Rosa Cervera presented in premiere the conclusions of an extended research that she has been developing for years, for the first time proposing the investigation and classification of the structures of natural organisms from the perspective of their properties of resistance, steadiness, elasticity etc., with direct applications in architectural design, both in ensemble and detail. Professor Rosa Cervera also guided two workshops proposing the realisation of the „most solid structure inspired by nature” and „the longest element disposed in console”

During its three intense days, the seminary generated an atmosphere of sustained work, both for the Master students that participated and for the guiding professors, finally a series of conclusions, projects and approaches worthy to be developed in future interdisciplinary research being produced.

Special thanks and warm congratulations to the organisers! 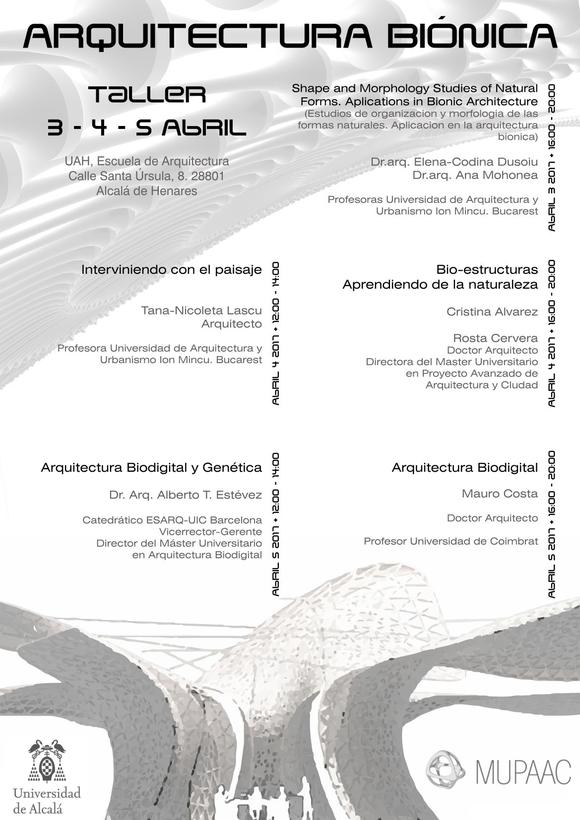