The exhibition HARALAMB H. GEORGESCU: A ROMANIAN ARCHITECT IN THE UNITED STATES OF AMERICA is a major phase of the Research Program, with the similar title, that we are currently carrying on (January 15, 2007 – December 2008). The research program, whose major organizer is “Ion Mincu” University of Architecture and Urbanism”, Bucharest, is done by a team composed of Lecturer Arch. Mariana Fetti, Arch. Cristina Koneffke, and Prof. Dr. Corneliu Ghenciulescu.

The exhibition will show and focus on the two different periods of the architect’s professional life, as follows:

1. Illustrations from his personal work as a major collaborator of his master, Horia Creanga, that is, during his early career (1933-1947), when he signed together with the latter several projects that turned to be landmarks of Romanian contemporary architecture.

2. Examples of original projects or their prints from his personal archive that illustrate the second period of his professional life (1947-1977), a remarkable period through both its diversity and thematic approach, and particularly the intrinsic value of the architectural object.

By including the two seemingly different stages, from both the chronological and “location” viewpoints, the exhibition sets to demonstrate a logic of continuity in the process and an commendable professional career both through his participation in the crucial moments of the Modern Movement of the 1930s-1940s Romania, and his original architectural work achieved in the United States of America over three decades.

It is worth mentioning that his remarkable work in the country over fourteen years, when he made his breakthrough as either an author or Horia Creanga’s collaborator, was ignored unfairly by people who followed the communists’ orders obediently. He was remembered only by his former colleagues who were forced to keep silent. What is more, his entire career in the States was hardly known in Romania. Until his shockingly sudden death, on November 22, 1977, Haralamb H (Harlan/Bubi) Georgescu worked on an impressive number of projects including a wide variety of themes, exhausting, in fact, the whole range of architectural programs, such as villas, private and residential houses, tenant houses, homes for the aged people, cultural and leisure buildings as well as office buildings and Orthodox churches, etc. 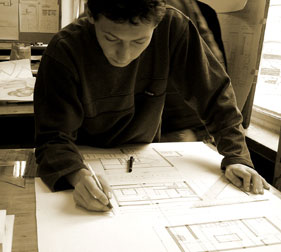