In 2003 the ION MINCU University of Architecture and Urban Planning obtained in concession for 25 years the Saxon fortified church from Dealu Frumos, located in the very centre of the country, at a distance of 5 kilometres from the town of Agnita, in which the Centre of Studies for Vernacular Architecture was created. The Director of the Centre is now Associated Prof.Dr.Arch. Sergiu Nistor.

The Romanian -Spanish Restoration Workshop from Dealu Frumos, an initiative which is now at its very first edition, started with some fear (will there be motivated participants?, will they be pleased with the modest accommodation from a village situated in the middle of Transylvania?), with a restricted budget (our call was answered by the Romanian Order of Architects, Hidroproiect Design, the PRO PATRIMONIO Foundation which provided us an interesting documentation, 2mtdv which realised our banner, of course the UAUIM and last but not least Marcel Nemeti, the administrator of Centre of Studies for Vernacular Architecture) but also an invincible enthusiasm from both sides of Europe, which finally saved us! By organising this workshop we intended: This time nobody obliged them! They practiced agriculture by their own! A quiet talk on the main street

And as a demonstration of the fact that culture is an authentic and universal gesture, not only the privilege of some few "elected", two groups of artists honoured us with their presence: ones very young (the folk music and dances ensemble from Agnita, with some members being no more than 7 years old!) and the others just a bit older (some 1st year students in Dramatic Art at the Hyperion University from Bucharest guided by their teacher, the well-known actress Rodica Mandache). Folk dance from the Sibiu county We thank them again, and also thank the participants mentioned above, and of course the 15 Romanian students, 12 Spanish students and the two architects, M.Arch. students at the La Sapienza University from Rome that contributed to the realisation of the projects that we briefly present here, which were based on a variety of themes trying to cover a multitude of aspects related with the local patrimony of the village.

1st team. Rodrigo ALVAREZ, Cristina CHIRTAȘ, Laura MARINAS, Francisco MONTOYA, Cristina NICOLAESCU, Eduardo TAJUELO - Rehabilitation Proposal for the Building of the German School and the Creation of a Visiting Itinerary of the Citadel.

Although being apparently two topics without a clear relation between them, the team pointed out the compositional, functional and volumetric between the citadel and the school. The restoration of the school and its transformation in a restoration school, as an effect of the intention of UAUIM to make here some studios where Romanian students in architecture and students from the Restoration School of Chaillot, France could meet, learn and work together due to a relationship which is now well established between the two institutions.

Regarding the proposal for the interior of the citadel, it is simple but surprising and courageous, in the same time solving the difficult access to the different levels of various parts of the citadel, situated at arbitrary heights, and bringing a personal shade to the project.

2nd team. Anne Marie GACICHEVICI, Lorenza NICOSIA (arch.), Mircea Nicolae STANCA - The Central Square of Dealu Frumos. Study and Proposals for the Restoration of the Main Front of the Buildings of the Square.

We reproduce the text in which the members of the team explain their work in attachment: team2.doc

We reproduce the text in which the members of the team explain their work in attachment: team3.doc

4th team. Berenice ARISTI, Francesca CONDÒ (m. arch.), Patricia GARCIA, Carmen NIEVES, Dan STROESCU - The Maurer House - the Study of a Saxon Farm Located in the Neighbourhood of the Fortified Church (1) - the house and the study of the farm

We reproduce the text in which the members of the team explain their work in attachment: team4.doc

5th team. Alexandru CHIRU, Emil-Alexandru DINU-POPA, Cătălina GRIGORE, Daniela STĂNCIUCU - The Maurer House - the Study of a Saxon Farm Located in the Neighbourhood of the Fortified Church (2) - the Way of Functioning of the Farm and the Annexes (Stables, Barn)

This team initiated a complementary study on the same subject as the 4th. team, dealing with a functional study of the farm which has one of the biggest dimensions in the village and especially with the annexes included in it, proposing solutions for their re - use. We cite some observations from the pathology analysis made by this team: " the water enters through the tiles of the roof which are situated directly on the wooden structure, the emergency intervention should replace the damaged tiles; in the basement water rises through capillarity in winter and during powerful rains, differently from the main house and the gate the stables don't have a stone basement; the proposed solution is to execute a drainage with gravel and a pavement in river stone; in winter, when animals are living in the stable, the interior walls get wet because of condensed vapour which imposes the necessity of remaking the mortar of the walls using a permeable one, eventually based on earth. "

This team realized a deep and sensitive study of the ethnical component of the village, draw the ethnic map of the place, pointing out the situation as it is now and as it was one century ago and especially conceived with clear cinematographic talent a film whose protagonists are the inhabitants of Schönberg themselves: Saxons, Romanians, Gypsies, corturari. Unfortunately we cannot present you their film but only a text with some conclusions and some pictures considered to be representative: team6.doc A picture by Alexandra Bejan

All participants received their well deserved diplomas during the final official ceremony held on July, in the presence of the Vice rector Prof.Dr.Arch. Nicolae Lascu.

As an effect of the recognized success of the restoration workshop in Dealu Frumos, at the invitation of the guests, the organization of the 2nd Romanian-Spanish Workshop of Restoration was decided. The workshop will take place in Boceguillas, in the province of Segovia, where the Superior Technical School of Architecture from Madrid owns a centre for the study of vernacular architecture very similar to the one in Dealu Frumos. 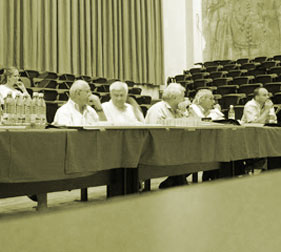