The organizing of this event proves a professional view reflected in the wish of identifying and solving real problems, which became, by the way, one of the principles of the European Association for Architectural Education (EAAE). With the generous help of the sponsor VELUX which agreed to be involved in a long term process without immediate financial results but with a promising future (we cannot but admire such wisdom, especially us, the ones who live in the country and time of immediate benefits) the awarding of the prizes became actually a workshop, which offered its main parts to the ten winners (Frank Weiner-Virginia Polytecnic Institute, USA, Upali Nanda&Irina Solovyova, Texas A&M University, USA, Kim Sorvig, University of New Mexico, SUA, Thomas McQuillan, SUA, from Arkitekthøgskolen i Oslo, Norway, Rachel McCann, Mississippi State University, USA, Jeremy Till, The University of Sheffield, UK, Andrew Levitt, University of Waterloo, Canada, David Willey, University of Plymouth, UK, Thomad Wiesner, Kunstakademiets Arkitektskole, Denmark, Deniz Incedayi, Mimar Sinan Fine Arts University, Istanbul, Turkey), but also to the conferences of internationally known personalities (Alberto Peréz-Goméz, Canada, Peter MacKeith, USA, Dagmar Richter, Germany- USA, Juhani Pallaasmaa, Finland, Per Olaf Fjeld, Norway), and equally everybody felt invited to express his own point of view. Organizers invited to this workshop the participants in the competition, too and I was one of them, representing in this context the UAUIM.

The debates were "under the events' pressure": while the biggest part of the speakers from US (quite numerous) analized pragmatically the existing situation, also proving that it is not so new and unsprecedented as we are accustomed to consider it (Dagmar Richter, Frank Weiner, Kim Sorvig, Thomas McQuillan), "the europeans" (not necessarily by origin but by culture and conviction) proved that it is actually impossible to go further without values (Alberto Peréz-Goméz, Canada, Juhani Pallaasmaa, Finland, Deniz Incedayi, Turkey, Jeremy Till, UK but also Upali Nanda&Irina Solovyova,US, Rachel McCann, US).

As a general impression this workshop demostrated the efficiency of a global architectural education system (I rather prefere to call it universal). The value of expressed opinions imposed a rich talking environment, even touched by a briliant intellectual battle. Here are a few examples that I chose for their charm and capacity to provoke:

Jeremy Till (citing Manfredo Tafuri): Architects are gymnasts in a prison yard.

Kim Sorvig: Virtuality did not begin with the computer. The taste of an apple lies in the contact with it, not in the apple itself...the same with space.

Dagmar Richter: It is nonsense to teach somebody drive a horse for getting a driving license (refering to the old discussion about traditional and contemporary techiques in the representation of the architecture project).

David Willey: If Nietzche said that God was dead it didn't mean that people stopped believing in God.

The complete works of the ten winners and other materials related to this event will be published on the EAAE site (www.eaae.be), which I warmly invite you to consult. 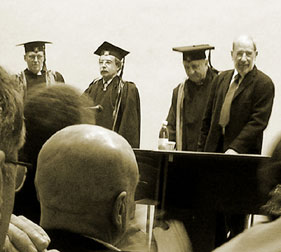