As an effect of the international workshop referring to "Fortified Saxon Churches from Transylvania - A Chance for their Future" organized by UAUIM in Dealu Frumos and Bucharest in July 2006, the Technical Superior School of Architecture from Madrid took the initiative to invite this year two teachers and 15 students from our University at the summer school organized by CIAT (Centro de Investigación para la Arquitectura Tradicional). CIAT is the perfect correspondent of the Centre of Studies for Vernacular Architecture from Dealu Frumos and Boceguillas is a Segovian village with lots of life and identity, a true brother of the settlement from Transilvania. Actually it intends to officially develop this relation at the level of local administration.

We are glad about the long term relation that developed between ETSAM and UAUIM, pointing out common cultures and mentalities. 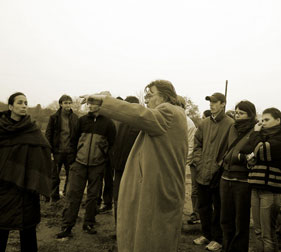