Ageing places, buildings and natural environments require delicate interventions. There are two frequently used approaches: subtle changes acting as a neutral background to highlight valuable building features; or broad changes permeating the place, establishing a dialogue between old and new features, possibly creating a new interpretation. There is however a further type of approach, one that empowers the place.

Many ageing buildings loose their character and are forgotten; similarly some entire areas, for various reasons, do not keep up with the times and fall out of fashion. These are the places we must address through architectural intervention generating empowerment, giving them an “upgrade”. There are previously overlooked areas which can be empowered by an inspired architectural intervention. Subsequently, an upgrade may help communities by providing architectural support to answer their needs.

The modern era developed a preference for fractured progress. Displeased, rightfully or not, by the development and evolution of art, people have proved themselves willing to initiate radical changes, introduce new rules, reverse almost anything, and ultimately invent new universes. And more than once, cultural movements fused with or became companions of political ones. Denying almost everything that had occurred until then, new movements were introduced as the “real art” portraying a new version of the perfect world. But for a culture to exist and mature, one crucial ingredient is essential: CONTINUITY. Only continuity over generations offers a culture the chance to survive historical changes. Continuity however does not mean imprisonment in one point of time but perseverance and trust in a value system.

Continuity does not follow fashion trends and neither aims, emphatically or arrogantly, to alienate them. Novelties are not a nuisance to a culture. Instead, they are - precisely through continuity - easily assimilated and accepted. Therefore the continuity of one culture means a permanent transformation, without an extreme departure from everything that existed before. No architect thinks that a building that they design would ever become an artifact; on the contrary, all architects believe that they are creating buildings that would always house life. Buildings are permanently changing, according to the lives of people and communities they accommodate. Yet within the changes there is a consistency that ensures CONTINUITY. 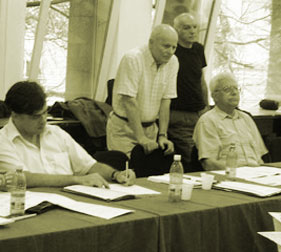